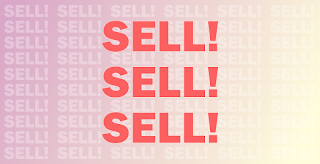 In the new 2014/15 financial year I started implementing a new 'sell' rule, to deal with the unpleasant - but necessary - task of getting rid of poorly performing investments. At the time this helped me to rationalise a clean-up of the portfolio, getting rid of long-term losing 'trees' that would provide a better overall view of the investment 'wood' (so to say).

Having adopted the rule, when it flashes 'sell', then I now feel much less reluctance to take the loss and move on.

Today's (forced) sale is the ill-starred Barclays Bank (LSE:BARC). Although it avoided the worst of the banking crash, it's performance has stuttered since then with the yield falling substantially.  BARC has been bouncing around near the 'danger' level for a while now. So when it dropped 5% today, as a result of a new potential banking scandal. I bit the bullet and sold up.

I bought originally back in May 2008, when it had a nice yield, at a price approaching £4 (!) and then bought some more a couple of months later when the price fell (and more later on, even more cheaply). A rights issue in October 2013 provided a chance to make back some of the lost capital. I sold a tranche of Barclays in April 2014 - and this is the last of them, sold at a capital loss of 35%. Overall, Barclays has significantly dented the portfolio.

If you are interested, the loser 'sell' rule works this way: I compare the capital loss with the current (or forecast) annual income. I use 10 years as the signal - in other words, if the loss is greater than 10 years' income, I sell, unless there is a strong reason not to. One feature of this indicator is that a lower yield (for example, due to a cut dividend) increases the likelihood of a sale; conversely, I will hold onto a 'losing' investment for longer (i.e. with a larger capital loss) if the income yield is higher.

For investments showing a nice profit, I also have a winner 'sell' rule. In this situation I like to wait until the capital gain is 5 times the annual income, to encourage me not to grab profits too early. Alert readers will note that there is still a lack of symmetry between the two 'sell' rules, with a bias towards holding losers for longer.

These rules are meant to help to compensate for the behavioural biases that affect all of us but how well they will work out in the long run remains to be seen. Encouragingly, over the past 12 months, the portfolio is up over 20%.

I am not a financial adviser and the information provided does not constitute financial advice. You should always do your own research on top of what you learn here to ensure that it's right for your specific circumstances.
Posted by Sisyphus at 10:26