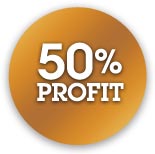 How would you like a 50% profit, presented to you on a plate. All you have to do is log on and tick 'yes'.

Too good to be true? Well, no - it has actually happened to thousands of investors. But if you missed it, sorry!

The Tooth Fairy in this story is Barclays (LSE:BARC) and their gift to the investing public was a 'rights issue' - a call for cash to existing shareholders: additional shares for cash. The bank is raising the money after Britain's financial regulator said it needed an extra £12.8bn to cushion it against potential market shocks.

So there's the first snag there - you had to be a shareholder. I am doggedly holding on to my Barclays shares since they fell from grace in the banking crisis. They didn't fall as far as others but their Middle East manipulations are coming back to haunt them - still, that's a different story.

The terms of the rights issue were one new share for every four held, priced well below market price.

And there's the second snag - only one for four. If you have recently bought your shares, you will have picked them up cheap-ish: consequently you will have a nice allocation. If, like me, you are holding them from pre-crash days, you might not get so many.

But I did get some  - or more accurately I have paid for some, as the money has gone from my brokerage account but the shares have not yet appeared. And if I sell the same number of pre-owned shares today, I would realise a 47% profit (£2.72 vs £1.85), less dealing costs. I won't be doing that, of course, as I'm waiting for my overall holding - which is still under water - to emerge dramatically like a surfacing submarine. I've been waiting over five years, so a little longer won't hurt.

But in anyone's book this is easy money. I wish there was more of it around.


I am not a financial adviser and the information provided does not constitute financial advice. You should always do your own research on top of what you learn here to ensure that it's right for your specific circumstances.
Posted by Sisyphus at 12:16