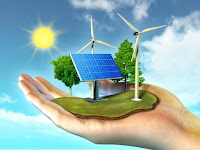 After getting a bit depressed about the options for good yields on offer for my current cash pile, a comment from a reader cheered me up - hopefully, in a good way.

I guess that most of us have become more aware of the environmental impacts of our activities. Despite trying to 'do the right thing' environmentally. I have always been a bit sceptical about alternative energy.

One of my fads a few years ago was tying to reduce our family energy consumption - watching the meter, unplugging 'power vampires' and economising on hot water.

Our local authority has also become much more of recycler and every day we carefully separate the different recyclables, reducing our family non-recycled waste to around half a black bin bag a week.
In addition, hardly anything useful is thrown out, with regular delivery visits to the charity shops and clothes/shoe recycling skips.

Moreover, I have always gardened in a fairly organic way, avoiding pesticides, operating a couple of compost heaps and weeding by hand.

So, we are sensitive to the environmental issues.

However, renewable energy is challenging. Despite the favourable public rhetoric, generation costs are higher (so renewables are always competing with fossil fuels, including the soon-to-arrive fracking downstream products) and the level of subsidy (required to make any commercial venture viable) is essentially a political pendulum. Yes, there is general public support for the concept, but people are increasingly upset about the high cost of domestic energy supply (due - it is claimed - in large part to so-called 'green taxes') and there is growing opposition to the establishment of on-shore wind farms.

Although the UK Government has made commitments on the future share of renewable energy, I doubt that these will actually be met, as the costs are likely to be too high - both financially and politically.

So, when an anonymous reader suggested Infinis Energy (LSE:INFI), my initial scepticism kicked in. However, the more I looked at it, the more I liked it (although - I hasten to add - I may be completely wrong). The 2013 Annual Report and Accounts makes interesting reading for someone new to this sector. Infinis operates a portfolio land-fill gas sites, wind farms and hydro-electric power stations.

There are downsides, of course:

However, one particular statistic in the Annual Report caught my eye: Infinis is the third-largest producer of renewable energy in Britain, trailing behind - wait for it - SSE and Scottish Power, two of the energy 'big boys'. It seems to me that, to any energy company seeking to improve its public image, the acquisition of Infinis would look like a powerful PR move, as well as potentially not too shabby, financially.

We shall see. Don Quixote famously attacked a windmill because he thought it was something else - whether I am 'tilting at windmills' for a similarly wrong reason remains to be seen.

As of today, Infinis is my highest-yielding dividend share holding, having taken a third of my cash off the table.


I am not a financial adviser and the information provided does not constitute financial advice. You should always do your own research on top of what you learn here to ensure that it's right for your specific circumstances.
Posted by Sisyphus at 10:10