A Question of Trust (Portfolio Buy) 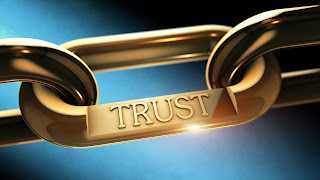 The DIY Income Investor portfolio is a cash-producing machine, even when it is sometimes grinding down value on some of the holdings. This is the trade-off that is the mindset of investing in high-yield securities. But at least the accumulating piles of cash (in different family brokerage accounts) means that the portfolio can be constantly refreshed.

Or not. Sometimes 'more of the same' is the best bet...
My first choice for investing spare cash is often to top up one my existing investments - on the basis that having 20-or-so different securities (half of them income-oriented ETFs, each investing in dozens of different holdings) constitutes more than enough diversification. I have reduced the number (down from more than 30) - but I'm not even sure that I know what is going on with all of the current holdings!

So, the most likely first call is a top-up - the key question is, obviously: what?

I start, not surprisingly with yield. I have organised the spreadsheet of my DIY Income Investor portfolio as follows, each ranked by current or forecast yield:
My current strategy is to keep a broad balance between income from dividends and fixed-income - which there currently is. My experience with trying to use geographically-diversified ETFs instead of direct investment in UK securities has been less successful than I hoped, so I have put that initiative on hold.

Finally, I don't want to put too much in any single security: I did that with APF (in a burst of misplaced optimism) and it is dragging down the whole portfolio. (I'm still holding...)

So, looking at my under-represented high yield holdings, one security stands out - with the obscure ticker MIG1. This is an unusual investment for me, a Venture Capital Trust (VCT) - specifically Maven Income & Growth VCT.

I first dipped my toe in the VCT water in August 2014; since then nothing bad has happened (that I am aware of). VCTs are fairly exotic investment vehicles that offer tax incentives to invest in start-ups and unlisted companies, with the proviso that your money stays put for at least five years. I don't need the tax incentives but you can also buy and sell shares in existing VCT companies and some of these have really attractive yields. VCTs must distribute 85% of their investment income, so their typically low dividend cover is not a factor (as it would be for most dividend shares). VCTs do not usually generate a lot of income but rather rely on making net capital gains: the dividend is paid mainly from (hopefully judicious) liquidations of holdings in companies.

When I reviewed the recent announcements for MIG1 I discovered this:


"The Directors intend that the full dividend for the year ended 29 February 2016 should be 6.0p per Ordinary Share (2015: 5.9p), of which 2.4p was paid as an interim dividend on 27 November 2015. Furthermore, in order to ensure that the Company will continue to comply with the VCT regulations at all times, part of the balance of the distribution for the year is to be paid as a second interim dividend.


Therefore, the Directors declare that a second interim dividend in respect of the year ended 29 February 2016, of 2.4p per Ordinary Share, is to be paid on 27 May 2016 to Shareholders on the register at close of business on 6 May 2016.


Subject to the approval of Shareholders at the Annual General Meeting to be held on 7 July 2016, the Directors also propose that a final dividend in respect of the year ended 29 February 2016, of 1.2p per Ordinary Share, be paid on 15 July 2016 to Shareholders on the register at close of business on 17 June 2016."

To me this looked like good news. Total dividend of 6p gives a yield of nearly 9%; some of this has already been paid but hopefully this level can be maintained in the future.

This ticked my boxes, so I looked no further and bought some more. Let's hope it doesn't bite.


I am not a financial adviser and the information provided does not constitute financial advice. You should always do your own research on top of what you learn here to ensure that it's right for your specific circumstances.
Posted by Sisyphus at 10:11