Mean Reversion - What Goes Up Comes Down? 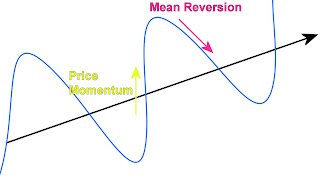 Mean reversion - the phenomenon of security prices (and therefore yields, for income-producing securities) returning to a 'normal' level - may exist for both equities (shares) and fixed-income investments.

In fact, this does seem to be what I rely on to make money with my high-yield DIY Income Investor portfolio! As well as hopefully pocketing the high yield for the foreseeable future, I am also betting on a price rise, so that I can sell in the short to medium term at a profit.
But the issue  - or even existence - of mean reversion is a controversial issue in economic literature. First, it may not exist at all but just be an 'optical illusion'.

Testing for mean reversion is apparently inherently difficult due to a lack of sufficient historical data on prices. Accurate statistical estimation of the degree of long-run mean reversion requires very long price series, which are not available. For example, if prices were to revert back to their fundamental value every twenty years, one would (apparently) need at least 1,000 to 2,000 yearly observations to obtain reliable estimations. The impact of the Great Crash of the 1920s has also probably skewed the available data.

But let's assume for now that it does exist - that security prices gyrate around a mean.


Several theories have been put forward to explain mean reversion, hinging on the widely-accepted concept of market efficiency (which states that all available information is reflected in the value of a security). Mean reversion in stock prices may reflect market inefficiency caused by the irrational behaviour of 'noise' traders, resulting in stock prices that take wide swings away from their fundamental value (vide Twitter). Irrational pricing behaviour, in turn, can be caused by fads, overreaction to financial news or investor’s opportunism.

However, price mean reversion does not necessarily contradict market efficiency. Assuming that all available information is incorporated into stock prices, the value of a stock is determined by the expected returns per share. Consequently, mean reversion is observed when expected returns are mean-reverting - an observed phenomenon. Fluctuations in expected returns may be explained from uncertainty about the survival of the economy, rational speculative bubbles or uncertain business prospects.


An article in the latest Credit Suisse 2013 Yearbook considers the evidence for mean reversion:

"This belief that time helps conquer risk is based on the view that equity returns are mean reverting. To the extent that periods of poor performance tend to be followed by bounce-backs, and strong performance presages reversals, then short-term volatility will overstate longer-term risk."

In the article the authors looked in detail at the relationship between the dividend yield and subsequent stock market performance for the USA and UK (resulting in, as they say, a possibly overstated relationship). For both countries, there appears to be a tendency towards mean reversion. Buying the equity market at a high dividend yield has on average been rewarded with superior real returns, as equity prices have reverted towards the mean. "For both countries, there seems to be superior performance from initiating equity exposure when stocks appear cheap relative to fundamentals and closing it out when stocks look expensive."

However, this characteristic does not seem to translate across all the markets of the Credit Suisse database.

And they find the same mean-reversion trend for government bonds:

"Buying the bond market at a high coupon-to-price ratio, or at a low price-coupon ratio, has on average been rewarded with superior real returns, as government bond prices have reverted towards the mean. For bonds, like equities, there is historical evidence of mean reversion."


However, overall, the Credit Suisse study finds only weak evidence for mean reversion.

Another study concludes on a note of caution (in relation to mean reversion and shares/stocks):

"Bearing in mind that the investor will underestimate the risk exposure of stocks if he or she overestimates the degree of mean reversion, it seems prudent for a risk-averse investor to base investment decisions on conservative assumptions regarding the mean-reverting behaviour of stocks".

So, there you have it: a big 'maybe' - be careful out there.

I am not a financial adviser and the information provided does not constitute financial advice. You should always do your own research on top of what you learn here to ensure that it's right for your specific circumstances.
Posted by Sisyphus at 17:44