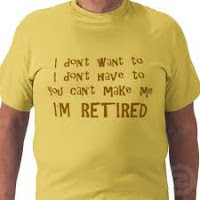 Preparing for retirement should be the main long-term goal for the DIY Income Investor - preferably retiring early!

To me, 'retirement' means having the income to do what you want - but also will probably require you to live 'sensibly' (aka modestly).

However - in the UK at least - the trend is going the other way, with retirement becoming more and more fraught with financial difficulties.

Aviva conducts a survey every three months of people over 55, tracking their financial situation. The latest survey (published December 2011) is reported widely in the press (e.g. here and here) -  and the February 2010 version of The Aviva Real Retirement Report is available to download.

The key findings for me about people approaching or in retirement are:

Aviva found that few people start "actively thinking" about pensions until they are 48 years old, and take another four years before they do anything about it. The reasons behind the failure to start preparing for a pension income include:

An income-oriented DIY Income Investor approach to savings and investments helps to prepare for retirement as it:


I am not a financial advisor and the information provided does not constitute financial advice. You should always do your own research on top of what you learn here to ensure that it's right for your specific circumstances.
Posted by Sisyphus at 08:55